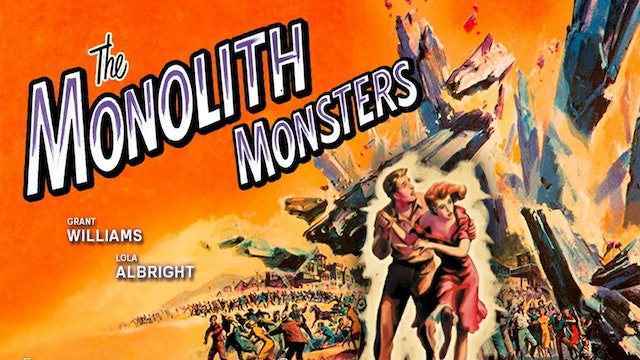 Sci-fi, by John Sherwood, United States, 1957.
A large meteorite crashes into the Southern California desert and explodes in hundreds of black fragments that have strange properties. When those fragments are exposed to water, they grow and become large and tall. The fragments begin to slowly petrify some of the inhabitants of a nearby town. When Dave Miller, the head of the San Angelo District Geological Bureau, returns from a business trip, he finds Ben's body in a rock-petrified state. Dave's girlfriend, teacher Cathy Barrett, takes her students on a desert trip; young Ginny Simpson pockets a piece of the black rock of the meteorite. In town, Dr. EJ Reynolds performs Ben's autopsy and fails to explain the condition of his body. Human survival against a natural disaster that turns into a threat to all of humanity.

Food for thought
Since time immemorial, the Earth has been bombarded with objects from outer space. Pieces and fragments of the Universe that pierce our atmosphere in an invasion that never ends. Meteors, shooting stars on which so many earthly desires are born! Of the thousands that rush towards us, most are destroyed in a flash of fire as they hit the layers of air that surround us. Only a small percentage survive. Most of these fall into the water which covers two thirds of our planet. But from time to time some meteors hit the earth's crust and formed craters of all sizes. At every moment of every day they come from planets belonging to stars whose dying light is too far away to be seen. They come from infinity, from the boundless regions of space.